The Alliance of American Football was dead in the water after their launch in February 2019. It’s no longer existing but read about the lofty goals the AAF was supposed to achieve in the world of sports betting.

Instead, use a BetMGM bonus code to bet on sports leagues that actually exist.

The league provided football lovers with the chance to watch competitive games during the NFL offseason. Also, the founders hope to include sports betting in the future. To learn more about the Alliance, read the full review below. 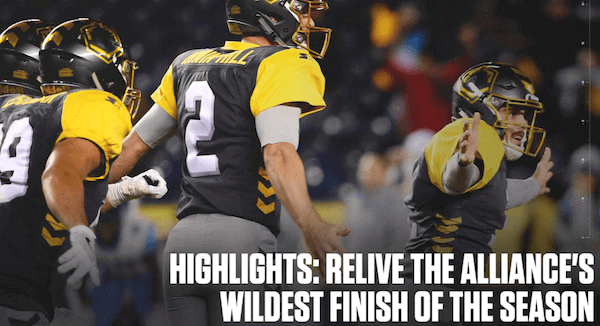 What is the AAF?

The AAF or Alliance of American Football is a professional football league created based on the alliance between players, fans, and the game. Founded by producer Charlie Ebersol and NFL Hall of Famer Bill Polian, the Alliance plays a 12-week season. The relatively short season fits nicely within the NFL season. The first AAF season kicked-off on February 9th, 2019. Naturally, the season culminates with the championship game on the weekend of April 26-28th, 2019.

As stated, Alliance Football attempts to fill the gap between NFL seasons and provide football fans and bettors with a chance to watch/wager on top-quality football throughout the year. The league can be viewed by either downloading the AAF App or on TV.

At the moment, Alliance Football consists of 8 teams from all over the country in two conferences. The teams feature a number of ex-NFL players and coaches. Many of the teams are from cities in the US that lack an NFL team. Likewise, the league is split into two conferences.

While very similar to the NFL, the Alliance Football League does have a number of unique rules. Most changes attempt to create more excitement in the game. Below, read some of the bigger changes to the game.

A sky judge keeps an overview of each play, assisting the on-field referees. This advancement is expected to make the games go faster.

As mentioned, the AAF schedule plays from February to late April, filling in the gap between NFL seasons. Each of the 8 teams has 10 regular season games. Additionally, each team plays each week without any bye weeks. The AAF schedule for the playoffs consists of the top four teams at the end of the regular season. As such, the penultimate games will be the 20th and 21st of April. Then, the two winners will meet in the championship. The championship will be held Saturday, April 27th.

Users may use the AAF app to keep up with the AAF schedule and find out which teams are playing each week. Many of the games are even live streamed through the app, allowing users to watch the game for free.

Thankfully, the AAF App is available on both iOS and Android devices and can be downloaded by either visiting the AAF website or the iTunes Store and Google Store, respectively. Users can not only watch games via live stream but also play a variety of fantasy games as the game plays on. 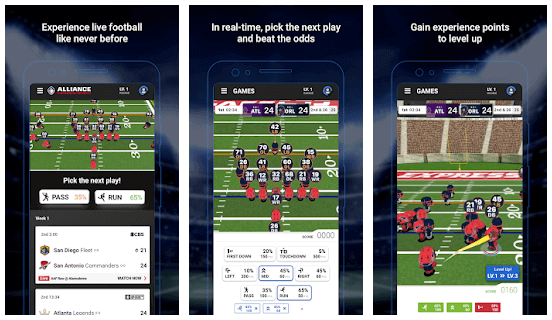 The AAF App is expected to feature AAF betting on AAF odds, picks and spread in the near future as soon as sports betting expands into more states in the US. The sports betting feature will integrate right into the viewing and fantasy section of the app, which should give users the chance to bet on games as they occur with fluctuating odds. Be sure to keep an eye on the AAF App if you’re looking for an easy way to place AAF bets in the near future.

How To Watch Alliance Of American Football

How To Watch AAF Schedule:

Alternatively, the AAF mobile app will offer an AAF broadcast via live streaming of all games except those broadcast on CBS. The AAF app has a few integrated fantasy games which can be played alongside the live stream of each game.

Select games will also be available for AAF broadcast on satellite radio at SiriusXM.

The Alliance League is into its fifth week at the moment which marks the halfway point. The league is just starting to find its form. Impressively, the Orlando Apollos ran a perfect season thus far, with a 4-0 record to lead the Eastern Conference. Likewise, there’s a dead heat between the San Diego Fleet, San Antonio Commanders, and Arizona Hotshots on top of the Western Division.

Big matchups to watch during week 5 are the games between San Diego and Arizona who are vying for the top spot in the West and Birmingham and Memphis who are each looking to cement their place as contenders in the East.

Week 5 could be pivotal in the result of the top two teams of each division that will eventually reach the playoffs. Expect all the teams to be playing their full strength squads and provide great AAF odds, picks and spread for betting.

The Alliance League was made on the back of a few key investments by large corporations and private entities. Some of the more notable investors and owners of the league include:

What is Alliance Football

The Alliance League is a brand new American Football League. It launched in February of 2019. The league attempts to fill the gap between NFL seasons. Also, it provides viewers in non-NFL team cities a chance to root for a hometown team.

Is there AAF betting available?

Yes, users may wager on AAF odds, picks, and the spread on a number of different online sportsbooks in NJ such as bet365, Pointsbet and Unibet. Soon, the league hopes to implement a tool on the AAF mobile app to take wagers.

How to watch AAF?

If you’re wondering how to watch AAF, you can watch the AAF broadcast on CBS, TNT and the NFL Network. Alternatively, all games which are not telecast on CBS can be viewed on the AAF Mobile App.

Is there an AAF App?

Yes, there is an AAF App available for both iOS and Android devices which can be downloaded by visiting the Alliance Football website or visiting the iTunes or Google Play Stores.

The Betrivers Affiliate code in Pennsylvania is PAMAXSPORT and PAMAXCASINO. With this Promo Code, you get up to $250 in bonus cash for sports and casi...

Knowing how to calculate bets can be a useful skill to have in sports betting. Indeed, with our betting odds calculator, you can remove some of the...
By Betoclock.com last updated March 17, 2021

Despite all the established security measures by sportsbooks and efforts by sporting institutions to regulate proper conduct at sporting events, ther...

Fantasy soccer is a great way to add a little extra spice to the season, creating your own team and pitting them against your friends, or total strang...

Smarkets, one of the most popular betting exchanges -  especially for matched betting, has announced a new sportsbook platform launch. Moreover, a be...