Taking place in southern Florida, the Pegasus World Cup is one of the top American Thoroughbred horse races. While it only started back in 2017, it is now highly regarded within the racing season.

Originally a field of 12, the Pegasus World Cup will now only have 10 starters. The second favorite, Spun to Run, and the heavily-favored Omaha Beach were both scratched on Jan. 23.

Here are the horse entries, along with their odds, trainers, and jockeys. 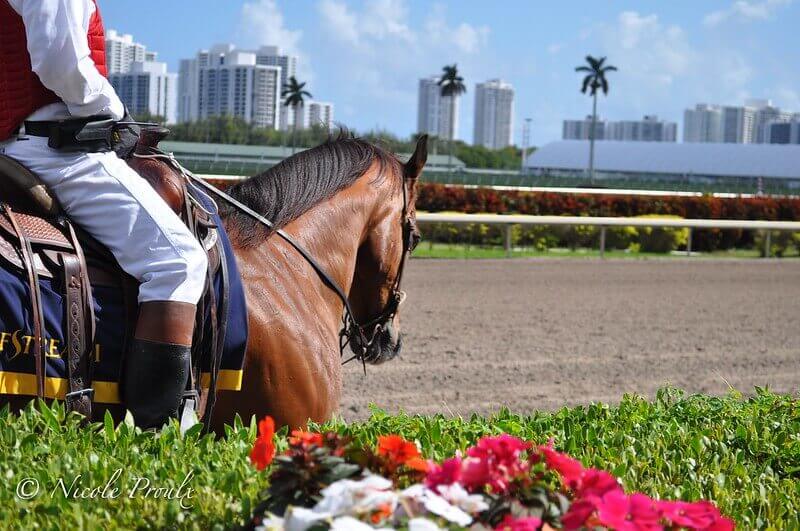 While we wait for this year’s edition of the race, check out the previous winners.

The Grade 1, $1 million Pegasus World Cup Turf Invitational presented by Runhappy first ran one year ago. That race launched Bricks and Mortar’s perfect season, making him a probable for the Horse of the Year award.

This year’s field will look to get the same momentum from the race, and it is led by the mare Magic Wand.

The entries for the Pegasus World Cup Turf 2020 with their odds, trainers, and jockeys are:

The first edition of the Pegasus World Cup ran on Jan. 28, 2017. Each year, it takes place at Gulfstream Park in Hallandale Beach, Fla.

The distance is 1 1/8 miles (nine furlongs) over dirt, and it is open to horses aged 4 years and up.

Back in January 2016, Frank Stronach proposed the race at the Thoroughbred Owners Conference at Gulfstream.

In its inaugural running, the purse for the Pegasus World Cup was $12 million. The large amount of money made it the richest horse race in the world, overtaking the Dubai World Cup.

In 2018, the purse rose to $16 million before dropping down to $9 million in 2019. This year’s edition caused controversy when it was announced that the purse was further reduced to $3 million, and the entry fee was waived.

Another big change this year made by The Stronach Group, which is the owner of Gulfstream Park, is that the horses are not allowed to use any race-day medications. The medication-free policy fits into the standards of the International Federation of Horse Racing Authorities (IFHA).

One of the most talked-about medications that falls under the ban is Lasix, an anti-bleeding medication used to prevent respiratory problems while a horse runs. The first uses of Lasix in the horse racing industry began in the 1970s.

The Stronach Group is hoping to usher in a new era in North American thoroughbred racing with the new policies.

Gulfstream Park was also the venue for the 49th annual Eclipse Awards ceremony, which takes place at the Pegasus World Cup. An Eclipse Award Trophy is presented to the winner of each division, and the most prestigious of all is the American Award for Horse of the Year. The Horse of the Year 2019 Award went to Bricks and Mortar. The 6-year old thoroughbred won 5 Grade 1 Stakes last year, including the Breeders’ Cup Turf, the Arlington Million, and the Pegasus World Cup Turf Invitational.

The 2018 award was presented to Justify, winner of the Triple Crown and the Kentucky Derby. The ceremony was held on Jan. 23 in the Sport of Kings Theatre.

Some of the biggest excitement for the Pegasus World Cup comes from the odds, predictions, and bets prior to the race. You do not have to be at Gulfstream Park to wager, as online horse betting can be found at TVG (4NJbets for New Jersey and PAbets for Pennsylvania) and Amwager.

Some of the most popular bets include Win, Place, Show, Exacta, Trifecta, and Superfecta. All of these are available to bet on in the Pegasus World Cup.

Leading up to the race, there was a lot of excitement around the even-money favorite Omaha Beach. However, the son of War Front was scratched after X-rays found a fracture in the 4-year-old’s ankle.

With the scratch of a favored horse, most eyes would then turn to the second favorite. For the Pegasus World Cup, that was Spun to Run. The 7-2 second choice was scratched as well, due to a skin problem.

The scratching of the top two horses made most predictions, picks, and markets invalid. Higher Power, Mucho Gusto, and Tax are the next three, and they will fight for favoritism.

The horses which were set to be on the outside of Omaha Beach and Spun to Run will benefit from moving inside one post at the start of the race.

What is the Pegasus World Cup?

The Pegasus World Cup is one of the richest and most anticipated racing events in the world. The first edition of the race took place in 2017, and it was only a single race with a purse of $16 million.

Today, there is also the Pegasus World Cup Turf, and the purse is reduced. The race is also the venue for the prestigious Horse of the Year award.

Where is the Pegasus World Cup?

When is the Pegasus World Cup?

The Pegasus World Cup normally runs towards the end of January. The 2021 edition of the race is set to take place on Jan. 23.

Where can I watch the Pegasus Cup live?

There are multiple ways to watch the Pegasus World Cup and the Eclipse Award ceremony. NBC will broadcast the race live, and it will be streamed by TVG.

Watching the Breeders Cup live is one of the most exciting experiences. Fans from all over the world come together every year to watch the biggest ho...

Live horse racing is a discipline enjoyed by millions around the globe. In this article, we go over the 5 best horse racing festivals in the world...

The Breeders Cup in one of the most well-known and widely respected dates on the horse racing calendar. Breeders' Cup 2021 will take place N...

Connecticut horse racing betting is a popular pastime in the Nutmeg State. Online betting on horse racing is legal in Connecticut, unlike sports betti...

Online horse betting laws vary from State to State, with the legalities of online betting in the USA somewhat confusing, but RI online horse racing be...